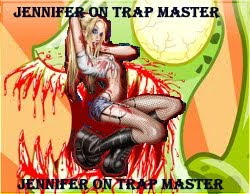 The folks at berzerkstudio have released a great new game. The player (as a monster) protects its doomchest of treasure from hoards of would be thieves. After beating the game the player can unlock jennifer.

Trap master offers a player the chance to burn, eat, smash, electrocute, blow up, throw acid on and freeze the thieves in different degrees of satisfying damage. Blood flows as a crunching is heard......swallow the humans to gain energy for your ranged attack, exploding fire balls or green fire spit stuff.

A variety of delightfully sinister traps are available to hinder or kill the pesky humans and their allies trying to steal a monsters beloved doomchest. The traps increase in damage with upgrades.

I have not beaten the game yet, however I created the image above named jennifer on trap master. Rumor has it she is actually a brain with tentacles.

Trap master can be played at king.com were an excellent walkthrough can be found.

Here are a few tips:

2 Keep an eye out for submarines that may sneek up on you while you are busy kicking human ass.

3 Put lots of traps on the doomchest tier. Catapults come on this tier and can be a pain.

4 Save money to upgrade the chest and your monster before going crazy spending money on traps. The time will come when you can set massive traps and sit back and pound a six pack, watching your traps do most of the dirty work.

5 When the wizard comes attack him relentlessly while eating humans when they get in the way. 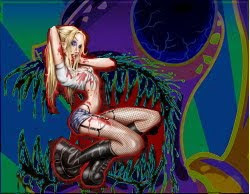 This goes to a site for aquarium codes.

Escape from the graveyard.

play land of the dead

Stomp around a city and destroy.

What's So Good About Team iDemise? iDemise is a multi-gaming team particularly famous for their Counter-Strike team, our #1 Ranked Counter-Strike: Source team, and #1 Ranked Quake Player. With a combined prize winning total of over $300,000 USD, we have become recognized as a powerhouse multi-gaming team in the United States, Asia, and Europe. Each one of our members has broken the previous 1-70 Leveling record by 2-3 days! We recognized the potential we had to make a leveling guide better than any other leveling guide out there. Now, for the past two months, we've been putting our brains together to create this guide.